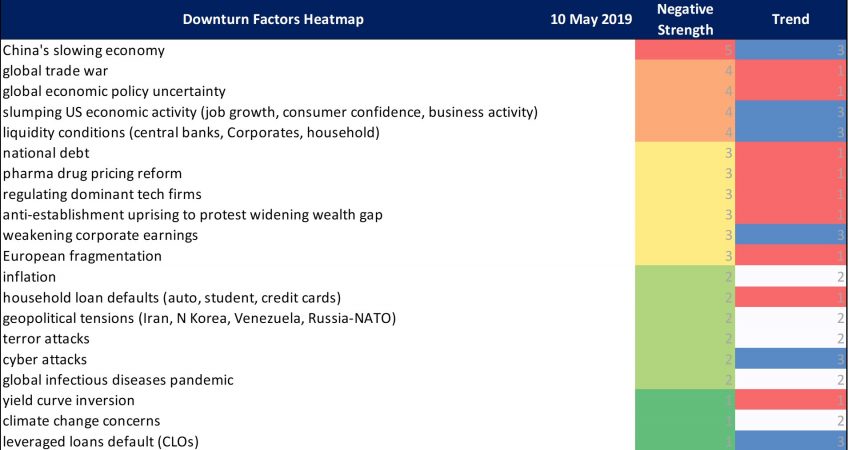 We get this question rather often: what are the likely catalysts for the next market downturn? The answer usually varies depending on the heat of the moment, and we have taken a comprehensive approach to it, not only referencing factors by their potential to influence the next downturn, but also by assessing their trend.

Top of our list of triggers with the most downturn-inflicting potential, are #1 China’s slowing economy, #2 global trade war, and #3 economic policy uncertainty. While China has been bottoming out from its economic trough in 4Q18 thanks to credit injections, the other two factors have been deteriorating, just to judge by the latest trade-tweet salvo or the disarray of international institutions.

Worth noticing are rapidly-worsening-factors such as #1 drug pricing reforms, #2 regulation of large tech groups, and #3 the irresistible rise of national indebtedness. Whereas, the first two would only impact directly a group of private players in pharma and tech, they are large enough to have side effects on the rest of the market, and they are symptomatic of a wider initiative to bridge the wealth gap through legislation (a long-term positive). The #3 is a reflection of our incapacity to end the quantitative easing cycle launched after the great 2007 crisis. MMT and debt-fueled national projects would only make the matter worse posing an unknown systemic risk.

These issues are well-known and our question, as investment professionals, is how much of these are actually priced-in? Devil is in the details of course, but the long and short of it is that a globally accommodative monetary policy is giving wings to a late-cycle global economy. On balance, we view that emerging stocks have priced in a higher degree of downside.