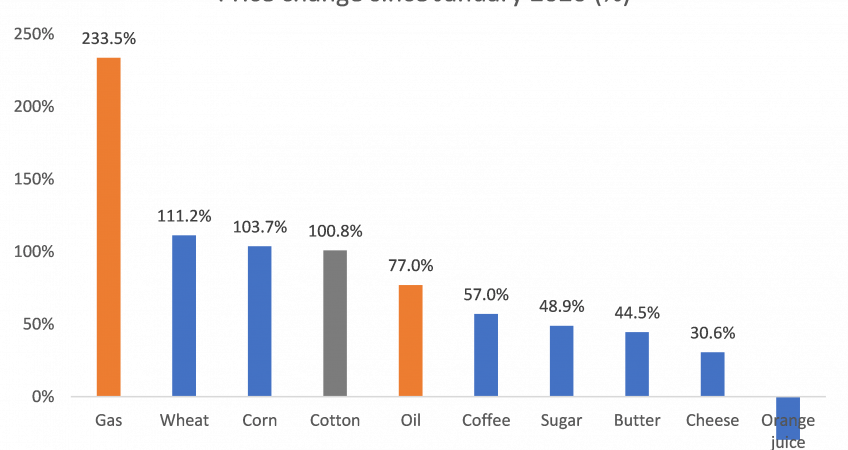 Inflation is not just a number. It is the reflection of price increases for day-to-day items, some you can do without, some that you absolutely need in order to live another day.

Since January 2020, prices have increased 3x for gas, 2x for wheat/corn/cotton, and 1.5x for sugar and butter. This chart is based on data collated by Steve Nouri from sources by CME, ICE, Morningstar, Bloomberg from Jan20 to Jun22, based on USD traded prices.

If you look at rental rates for single family homes in the US, the latter grew about ~25% during the same period.

Granted, these numbers have to be compared with benign financial conditions, and overall wealth during the same period, as Government subsidies kept things afloat. Whatever your economic analysis might be, you may want to look at how people and countries started living through it.

Look at the default of Sri Lanka in Apr22, riots in Ecuador, rampant inflation in Turkey, and Pakistan urging its citizens to drink less tea. As commodities prices grew in USD terms, emerging market economies appeared particularly vulnerable, and unrest is taking hold on most parts of the world.

Such contagion is reaching wealthier countries alike. While they arguably have more economical means to fight it, popular discontent is rising as the cost of living increases. Populism is already ripping across Europe. In France, populist parties got 49% of the legislative seats at the assembly at the latest election in Jun22. Most certainly, the US will face such turmoil again at the next election.

The good news is that commodity prices seem to have peaked, and started retreating in early June. Some of it is linked to the not-so-good news of global recession, which looks more likely by the day. If you say the R word three times in a row, it happens. The issue with a recession is that revenues decrease along with costs, and it means growing frustration equally.

Such scenario is not a fate. Decreasing geopolitics tensions would help ease food supply. The easing of the post-covid pent-up demand would also decrease pressure on the supply side. Protectionist Government measures, such as US tariffs, could still be relaxed. Global logistics remains a bottleneck and should attract more capital investments, as myriads of trading players are still distressed by elongated working capital cycles.

Short of quick measures on all front, the world will grow hungrier and angrier.