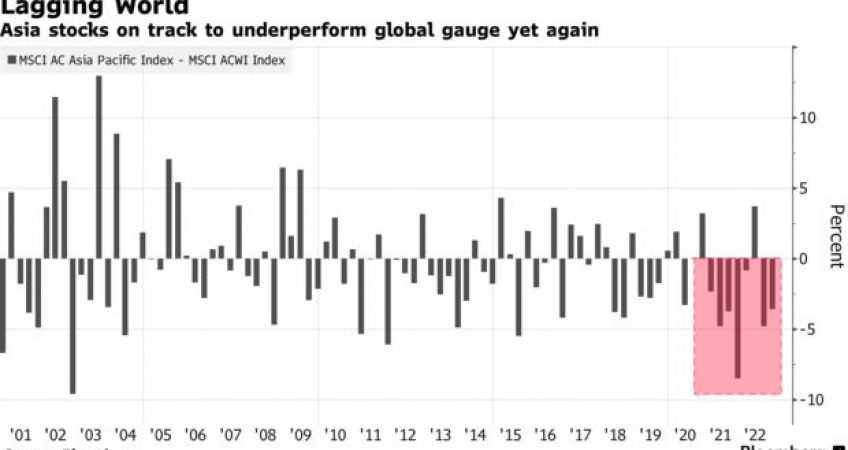 While all eyes are on the US and the Fed, China has fallen out of favour. The country is definitely in a spin, and positive catalysts are short on supply. Sometimes in investment, it pays off to look at opportunities that others have thrown the towel on. Deep value trades as they call it. This week, Nomura and Morgan Stanley were calling the bottom for Asia stocks, after “seeing abundant signs of extreme selling”. So, let’s look at it.

There are the devils we know. China’s economic growth tumbled from 8.1% in ’21 to 2.8% in ’22, according to the World Bank. This was the result of plenty of self-inflicted curbs on the financing of real estate, 25% of GDP, and on the severe restrictions on certain sectors, such as gaming, social media, online learning, and fintech to name but a few. This was also caused by tougher geopolitics that curtailed China’s trade in strategic goods with Western counterparts, cut out China’s tech companies from large markets, and forced politicians into an even more aggressive rhetoric. The latter is by-the-book Thucydides trap, where the ascent of a large economic and military power forces the others to coalesce and block it. Lastly, China folded back onto itself, as a result of arguably necessary and protracted zero-covid measures.

There are the knowns unknowns, as then Secretary of Defence Donald Rumsfeld put it in 2002. We know we don’t know the outcome of the Party’s 20th Congress that will probably secure another 10 years of reign for Xi Jinping. Who he will choose as the ruling team, and what will be their stance on economic policy is yet to be written. Will Xi return to a communist red book hard line, or will he embrace change that is compatible with the rest of the world? On the economic front, we can hope for easing on real estate financing, spending plans on infrastructure and lodging, and a further reinforcement of investments in AI, green technology, quantum computing, and semiconductors. In VC investment as % of GDP, China has been ahead of the US and the EU over the last 2 years.

There are the unknown, unknowns. Are free speech and democracies necessary conditions for nations to thrive. Daron Acemoglu, author of “Why Nations Fail”, seems to think this way. For him, the absence of democracy favours nepotism and wealth only benefits the ones in power. Is the US necessarily better, where 1% of the population own 53.1% of all stocks in the US, and bottom 50% own less than 1%?

Would you rather nudge economic development the way you think it should go, or who you rather give all experiments a chance, including those that are clearly at the expense of others’ wellbeing? The Chinese “common prosperity” model inspires a different form of consumption, and attempts to further development of industrial modernization, as opposed to hedonistic consumer-oriented services. Will it succeed?

Tough choices, right? It takes a village to stir the world into the right direction. And right now, I hate to say that we’re not giving China’s diverging viewpoint the consideration it needs. If anything, that should provide food for thoughts on the economic policies we pursue in Western countries. More prosaically, it may uncover needed and lucrative investment opportunities.